Indeed I feel a great sense of guilt when I think of this blog. It used to be a daily right of passage. A gift to myself that I would go through my musings and decide which were most hilarious, celebrate my clever turns of phrase, pat myself on the back for the witticisms I would think of. I love writing it. It’s one of the only “me” things I tend to have. I am otherwise an employee, a partner, a friend, a son, a grand son, a dad, but rarely me. So it’s actually terrible that I’m so neglectful of something so cathartic.

I have actually begun embracing my thoughts in more ways recently. I was listening to Graham Norton on Radio 2 (hands down 3 of the best hours of radio on the wireless) and I heard Martha Stewart talking about her global omnimedia organisation and how she was launching in the uk. This blew my mind, not least given that she is still so driven when most people are basically driven from GP to Waitrose, to home, to hospital appointment to Marks and Spencer to buy Footglove shoes which are kind to bunions. Martha has launched her stationary in Staples. I needed it in my life.

So off I trotted. Staples is an odd world to me. It’s a one stop shop of the resentful shopping you have to do once every 5 or 6 years. Office furniture, desks, desk chairs. Then it’s the dull essentials. Inkjet cartridges, paper, post-it’s, boxes. It’s unsexy shopping made even unsexier as no one appears happy to be there. And the fact that they have a security guard makes it even sadder. I fear the Martha Stewart range of textured labels and folders won’t trouble the shop lifters, but I went mad. Labels for my spice jars, and a journal, came away with me.

My journal was a master stroke. I don’t know if I have ever bemoaned to you lot, but I have occasional disasters. Dry bakes, uneven bakes, spongy pavlovas, overly risen bundts. All suffered. So the journal is my food journal. I write ideas I read, things that perhaps Nigel Slater writes about which I approve of. I write down how my recipes have turned out, where I don’t think things have worker, where they have, write down my revisions, write down my approval ratings. It’s quite a master stroke, I don’t know why in haven’t done it before. When you write down how it went you are honest to yourself. I’m so pleased I have done it.

I just need to be a better shopper. 2 bunches of browned coriander were binned today. I must stop just buying stuff I like even if it’s not needed. I do the same thing, week in week out, buying food I crave but zero meals. Today I had my head turned by pork belly. I had seen Annabel Langbein, the kiwi TV chef who looks a tad like Joe Sugden’s ex wife off of Emmerdale (obscure reference I know) who actually does some really accessible and seasonal food. She made Pork Rillettes with a prune jammy topping. I went in. 3 hour slow cooked pork belly, dredged in its cooking juices, and blitzed, covered in a prune and red wine jam and spread over a gorgeous loaf of white bread. Heavenly. I made four bowl fulls, two of which are in the freezer for other days.

Since I last wrote to you I have also added another desert island ingredient to my baking must haves- pumpkin puree. Pumpkin cake is amazing.

It’s so October/November it’s untrue. It’s actually a bit December as well. It cried out for cinnamon and nutmeg. It needed it. The triumvirate of cloves, cinnamon and nutmeg herald in a period of time in the year. Those days where the halcyon days and nights which blurred under the suns warmth are gone, and bring with it the opposite pleasure. That of dependable cold which one must battle under layers of lambs wool and duck down jackets. Where many a daily choice has ones warmth in mind, be it coffee vs hot chocolate, soup vs a cold sandwich or warm fiery curry vs sweet spiced tagine. It is those very spices which are the epitome of winter to me. They announce the upcoming yuletide festivities, which bring such colour and light into such a time shrouded in dark. Spiced Gingerbread, sweet mincemeat, rich fruity Christmas cake. The scent of cloves studs the sir as cinnamon sticks stir gluhwein on cold cold streets. It’s just immediately a feast on the senses, and to my mind it makes me feel instantly happy to smell those wintery warming scents. It warms me from within even if I’m, in reality, just as bloody cold as before.

I’ve recently found that Copella do a Winter Warmer apple juice, with said spices infused in the juice, just awaiting a blast on the hob or in the microwave. I recommend it greatly, it is a karmic boost at this time of year. I am already getting into Christmas mode. My fir tree bundt purchased in Bath is a winner, which I have used once for a cinnamon and almond bundt.

It was the wrong tin but a killer recipe. I think I feel an afternoon recipe planning coming on. Plus I want to have a Nigella style soirée this year. I have a dog to dress up, I need the festive occasion as an excuse.
Talking of dear Daphne, I have the cutest photo to share with you. On a recent visit to my mum’s house, Holly and Daphne appeared to be firm fiends rather than friends. 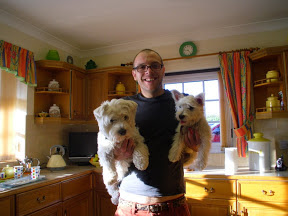 Until it was snoozy time, when Daphne appeared to be happy to be used as Holly’s pillow. So cute. 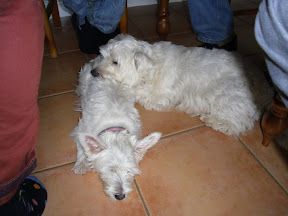 Anyhow, the reason I’m a tardy blogger is that when I get going, an hour passes and I feel I could continue for days. I’m sure these posts lack any direction. Don’t give me a book deal, any editor assigned me would want to pull their hair out. Poor old Nigellissima has lost any attention from me tonight. Repeat viewing must be booked in.
Hope all is well in blog land. Bake off final tomorrow. I’m totes team James, but expect nothing, it’s an open field in my eyes. Have loved this series, Mary Berry- Fashionista has been a revelation.
Sleep well dear hearts. Blog later. X
– If ever in doubt, just ask yourself- What Would Ina Do? You can bet your bottom dollar it would involve Hydrangeas and Homosexuals

3 thoughts on “Apologies if I have left you hanging….”