Stress is a difficult thing to discuss. Its impossible to wipe out, and its nothing tangible, definable and easy to make out. We all have to deal with it, live with it, and cope to a certain degree. It can be helpful, it can make us all keener, motivated to move forward and complete tasks.

At times I have been able to plough ahead and cope with life’s challenges. The “slings and arrows” as cliche would put it. At others, its harder. Like I have reached a point of saturation with things. The renovations this year have really pushed me to my limits at times. The building work is done, the men have left us, and we were left with our jobs. The list has shortened, but still has outstanding tasks.

Now those ticks suggest plain sailing. God only knows I wish it were seamless. I have to say that if I have learned anything here, it’s that what is agreed is not necessarily what happens, and what people tend to promise will happen should be considered a “guideline” rather than anything else. But I have also learnt that what doesn’t kill you actually does make your stronger, more resilient and better prepared. If you can deal with pressure, if you can keep calm amongst chaos, if you can deal with disappointment and stress in a positive way, those coping mechanisms will keep you in check, in good stead for their equivalents elsewhere in life. 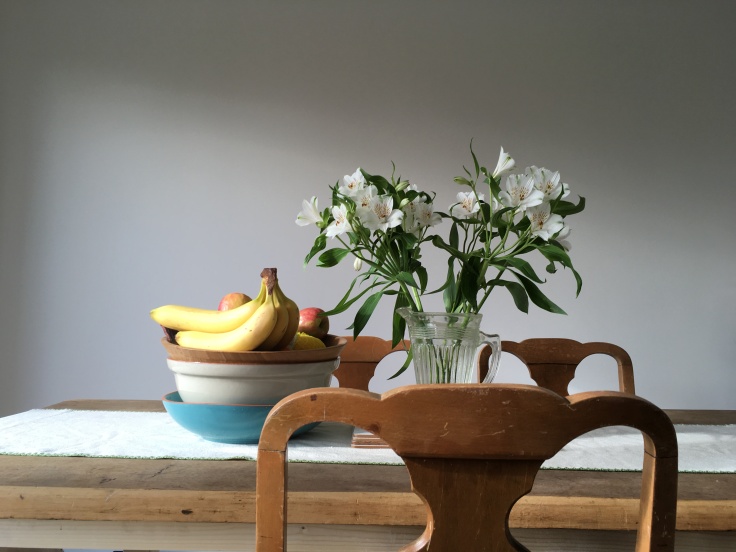 This was taken in our extension. Picture perfect.

But boy have I had to smile through some gritted teeth on my way here. The builders were amazing. Tidy, personable even when the neighbours grew weary, and turned up regularly. But not every task solved itself. Sourcing the flooring was the hardest task of all we have done. The quotes for the vinyl floor tiles we decided upon started steep. £4000 plus steep. We weren’t able  to pay this, it was far too expensive on top of everything else we have done. We shopped around. I called around and got quotes. John Lewis offered us such a competitive quote, and finance was available, so we waited 4 weeks for a consultation visit. A man who had some of the poorest interpersonal skills ever experienced in the customer service sector attended our home. He proceeded to refuse to do anything if the dog was too near the space he was in, and when he did do anything he made sure he scraped his tape measure on the freshly painted (in Farrow and Ball Strong White) walls so as to necessitate a retouching job. When I went to the toilet he shouted through the door to ask me to come out as he was ready to talk to me. I was in the loo. Lets just consider this. A man effectively shouted for me to hurry up as I went for a pee IN MY OWN HOME. I hope you find it as excruciating a thought as I found it an experience. It turns out it was a waste of time, they had underquoted us. You know, only by a small margin. 25%. You know, Just a bit. A smidge more than originally quoted. When I queried this, he was beyond short in reply. “Never promised”. “Wrong calculations, but it was never an offer, you should have kept that in mind” etc etc. So much time wasted waiting for them.

I reacted in the only way I know how. I did some angry dialling to other outlets, booking in visits to try and pretend we hadn’t just tossed off a month waiting for this waste of time appointment. A local outfit came out that lunchtime, sending a vinyl floor fitter and the boss of the flooring company. Within an hour of chatting to them, we had more of an idea about quality, style, after sales, methods, options- the lot- than we have from anyone previously. Now this wasn’t the case with some other independents, but what we found was the advice reflected the business they had done, the feedback received, the battles they had experienced with suppliers and what they understood we wanted. In all the ways the employee, or “partner”, from the chain store gave us less than minimum, I felt that we got the benefit from all the collective wisdom of the man who deals with happy or disgruntled customers and the man who lays the product we were keen to get.

Beyond this, there were a few more issues along the way but we now have our flooring down. It was the best decision we have made to follow our hearts and have it laid in a herringbone pattern. 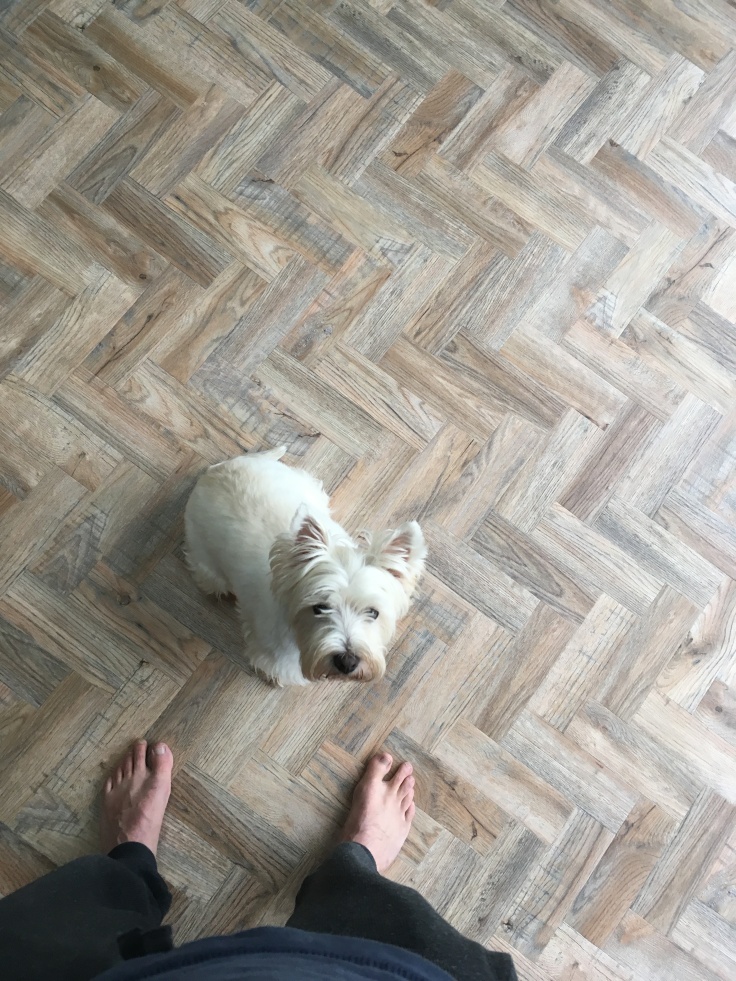 So thrilled with the outcome.

So its all coming together.

See the kitchen. I LOVE it. The lights especially- hand blown shades by Curiosa and Curiosa. 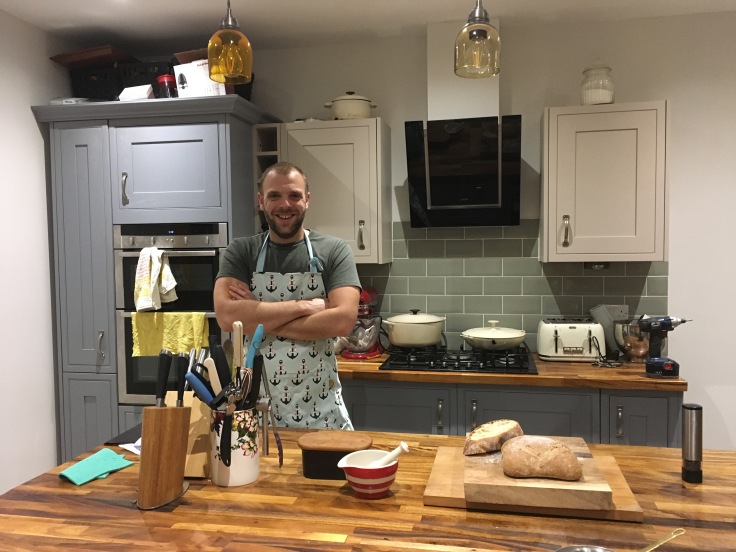 The wood burner is here. Its beautiful. It took a few days but it is now up and running . We heard those fateful words “it’ll be a bit more of a job than we thought”, which never does bode well. I never quite get why people are so inclusive when they discuss their approach to things like this, the use of the word “we”. I had no idea what kind of a job it was going to be to start with. What the hell do I know? If I knew how to install the bloody thing in the first place I wouldn’t be trusting some stranger to have free reign of my house. The guy Pete sourced, not I. I had a few candidates who came round who didn’t want the job. Pete found a lovely guy who truly did want it. Very chatty, with a love of Jazz FM. Every day I would come back home, put the radio on and would be greeted with some awful elevator music. He told me that he and Pete had “really got into it”. That’s Pete, who loves Whitney Houston, Enrique Iglesias and Niall Horan, also with a love of Duke Ellington and music that to my untrained ear all sounds like the theme from Moonlighting. I think Pete was being agreeable.

We’ve had a few weeks off. Some of this was unexpected. My grandmother ended up in hospital receiving palliative care. Her decline had been rapid, the change almost shocking whenever I saw her. Sadly she passed away. Its a horribly sad time and was the hardest thing for us all to witness. I want it all to be temporary, a light at the end of the tunnel, but it isn’t. There isn’t one. She’s gone. My mum has lost her mother. The best we could hope for is for her to go peacefully, quickly and, without appearing callous, for it to be soon. She had a tumour, she was in pain, she could not eat or communicate. You say the word “blessing” a lot, and for her it was. Im not sure what type of blessing loss is for those who are left behind. But my Nan was far more than the ending. She was a force of nature, a single minded woman. I remember her as a woman who had a real crafty streak. She played the “little old lady” card so many times. Walking into the butchers and bypassing the queue, pretending she couldn’t see the queue to get ahead of them all. Mortifying to the rest of us, but she got home in time for Knots Landing. Playing the “loveable pensioner” card to make sure there was always someone tasked with topping up her glass. Getting everyone to buy Baileys for her as “Pete likes a Baileys and he’s coming soon”, yet somehow a litre of Baileys is consumed before we even step foot in the door. It turns out Della Roberts liked a Baileys in lieu of Elevenses. And after lunchtime Neighbours. And whilst watching Escape to the Country. Basically anytime she fancied one. She was also the only person I know who really did speak her mind, and got away with it. I still smile at the thought of her Niece turning up one day, my nan opening the door and saying “Oh I don’t think so, I’m in no mood for you” and slamming the door shut. I can but dream of a free pass for such boldness.

As a result of these developments, some silly little jobs, small tasks that but for a few weeks ago would have been done on an idle Saturday, lie in waiting. Repainting one wall (estimated completion time- one of the two charts on Pick of the Pops on a Saturday afternoon), fitting two new pendant light fittings, putting up some shelves a, clearing some rubbish out a bedroom, a couple of baskets of ironing, fixing the table dryer door, hanging a few pictures. All need doing. I think we’d do it in one weekend if we just went for it. I may lay down the challenge for Pete. Its easy to try and put it off some more. None of us are any the less tired or find it easy. Im up at 5:30am every day and I don’t stop until dinner is served in the evening. But alas, we are all of us no different, we are all our own primary focus. But I just want to reach that ultimate goal- the finish line. It won’t be long. My parents will be spending Christmas at our house, and friends are coming in a few weeks for an early festive get together, which is a perfect deadline to work to. Many of the jobs aren’t long, they just need us to push through and get them done. and thats just what we will do.

I also have a food mission coming up. A number of cakes for a top secret event. All need to be a bit fancy, all need to be carted in the back of a car for a while, all need to be done on top of the day job and a couple of visits to see my mum, as well as the probate solicitor and helping with some funeral prep. Its a good thing I have a sense of humour, and find cooking and prepping food a source of joy and therapy. Otherwise I may find this whole thing stressful. Its just bad timing, but also good timing. Distraction can be very helpful at times such as these.

Oh and did I forget to mention? I MET NIGELLA. When I say met, I went to a book signing and waffled. I waffled like a big old waffly thing. Like I was Crown Prince Waffle of Waffleton. I gave her a tea towel and a probably stress headache. Dear Nigella, I apologise. Please take the tea towel and bottle of Henderson’s Relish I gave you as a token of my sincere regret for my nonsense. 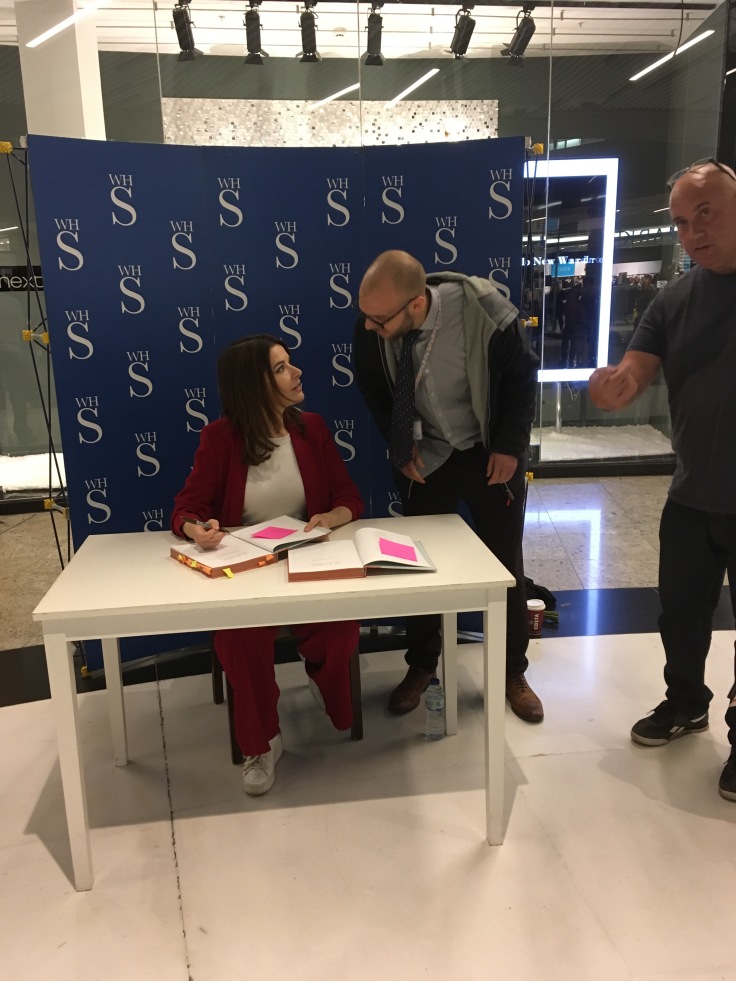 Is it just me, or does she look terrified????

Keep em peeled for my cake odyssey. Time for me to get posting more regularly. And you know what, I think tis the season to be greedy. What more of an excuse do I need?!?!